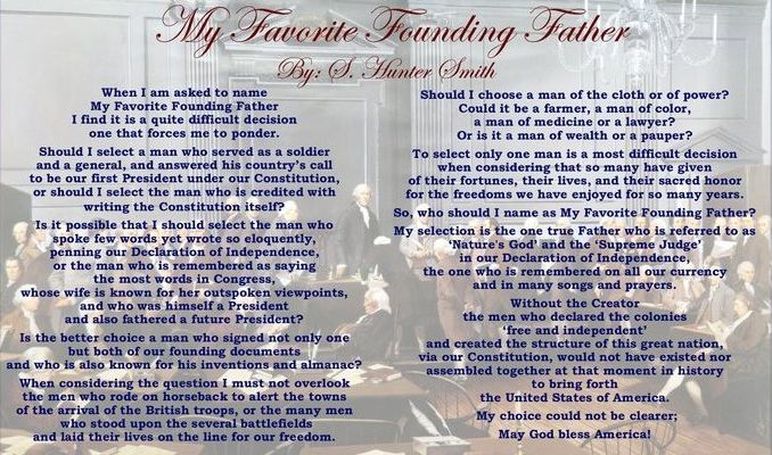 "My Favorite Founding Father", I believe, came from my life-long desire to learn the truth of America's history. By understanding the truth, I respect and embrace the fact that God created our Nation - One Nation Under God!

What made me write "My Favorite Founding Father"?

It was the summer of 2010. I was running for a seat as a Delegate in Maryland's Legislative District 11 (before it was horribly gerrymandered).  After mentioning my interest in American history, during one of my public appearances, a person shouted:
"If you love history so much, who would you say is your favorite founding father?"
Without hesitation, and not an ounce of rehearsing, I replied with an honest, off the top of my head and from the bottom of my heart, abbreviated version of what has become the "My Favorite Founding Father" poster you see above. Later that day, recalling the question, I wrote my full and complete reply, "My Favorite Founding Father".
My devotion to the answer I describe is clear and I will forever stand by my choice!
As a very proud American, I frequently study the 200+ years of United States history.

I look for factual data that is supported by documentation and eye-witness accounts. It's a "Living History" approach to understanding what really happened in the past versus what has been interpreted and regurgitated through other people's opinions (something I refer to as "Stale Manipulated History").

Knowing the truth of history in America has provided me a unique understanding and appreciation for the people who lived through those times. It has also provided me the clearest vision into understanding how history, if not learned correctly and accurately, will doom those who believe the myths and lies.

Case in point:
"Paul Revere's Ride", by Henry Wadsworth Longfellow (often incorrectly thought to be titled "The Midnight Ride of Paul Revere") is taught to children based on how the poem was written.
The true story is best told at the Paul Revere House at 19 North Square, Boston MA 02113 or by visiting the website: Paul Revere House.

True stories of history are much more exciting and informative!
Knowing the truth can change the false perspectives too many people believe.